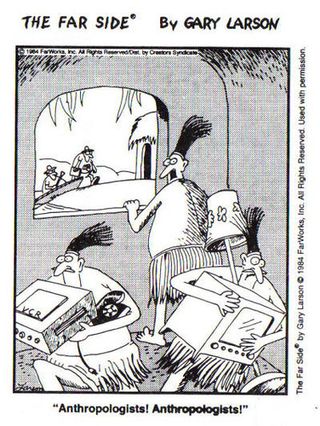 Today will be a brief introduction to applied anthropology through an exploration of design anthropology in particular. In American popular culture, anthropologists are seen as people who go off to far-off places and embed themselves in a particular culture in order to understand what’s going on. The anthropologist, through participation-observation fieldwork, is then the translator of the native’s point of view to the wider world (and yes, if this seems like a problematic epistemology, it is). But this is a stereotype – anthropologists work in all sorts of settings, equipped with a bag of mixed methods, who work in factory floors, development projects, and in corporate America. Drazin’s explores one area -design thinking- where anthropologists have been active, especially in terms of digital technology, where he writes: “Design work’s focus has gradually shifted away from points of view which are entirely driven by building technologies towards also exploring ideas of need, local values, relationships and identities” (Drazin 2013)

“Design, then, is becoming a popular, public activity, and it potentially signifies shifts in the balance of power and expertise between companies and publics. The question is, as the skills to make and work with products become popularized , is this an empowerment of publics in relation to corporations or a neutralization as they align themselves cloer to corporate thinking?” (Drazin 2013)

In the early 2000’s, anthropology was picked up by many businesses to the point where anthropolgists themselves caricatured this work as a ‘novel form of market research’ (Suchman 2097, cited in Drazin 2013). The field has matured since then, re-absorbed by the wider field of applied anthropology (mostly because all sorts of people were doing ‘design anthropology’ or ‘digital anthropology’ who had at best a tangential background in anthropology).

While Drazin is talking about ‘design anthropology,’ what he is really talking about is Human-Computer Interaction (HCI), a field that has become popular as an intersection between engineering/technology and business. (We have a ’94 alumna who is director of a graduate program in this field and many many more recent alumni who work in this field).

(Note, the video itself was a design challenge – Create a digital story aimed at teenagers to explain HCI in under 2 minutes).

Anthropologists have long been involved with HCI, even before it was called HCI, to the days of Gregory Bateson, Mararet Mead, and what we used to call “cybernetics.” How do people actually use technology? The idea of participatory design.