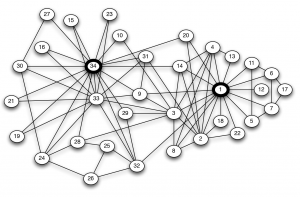 While there are many books introducing network analysis, I chose this one because it does a good job succinctly bringing in network concepts and methods; and the authors released an open version of it. Here is another one (Zweig 2016) available to you for free through the Davidson Library.

First, some notes on how we are using this text by Easley and Kleinberg. For the purposes of this course, I will not be going into any game theory, so you can read sections that talk about game theory more quickly. Second, there may be problems with the page numbers that I cite; I use a Kindle version of the book (that doesn’t have page numbers), and I’m not sure the pdf version matches the same page numbers as the actual print book (if you have that copy). Page numbers that I use are all from the pdf from Cornell. Third, sometimes the terms used by Easley and Kleinberg differ from the terms that I use (from anthropological approaches); where they differ, I will point them out the first time, but then continue to use the ones that I am used to using.

Easley and Kleinberg approach network analysis from the perspective of change, where the goal of the analysis may be to cause individual behaviors to change, information to flow – some kind of action that flows through the network (and this is where game theory is relevant). Others use network analysis to understand, to reveal hidden structures or find out how ideas and actions flow through a network. The second approach is more of what we will be doing in this class, but clearly understanding the social network of a particular community reveals how to take action.

Moreover, we will be focusing on using and understanding smaller scale networks, as depicted in the picture above (which is the karate club figure 1-1 in Easley and Kleinberg). This is primarily a limitation of the smaller datasets that we will be working with – since you will be generating those datasets! Working with larger datasets is not a huge methodological jump, but since we will be exploring why things are the way they are, smaller scale networks are necessary.

From Chapters 1 and 2, please note that the networks they describe are not always people. In the karate club example, the nodes are people, and the edgeslinking them are some kind of social relationship. But networks don’t have to be about people – they can also be countries (as in the international trade example), concepts, or many other things. But they have to be of one type to make analytical sense (well, they don’t have to be, but we’ll get into that later).

Below are some concepts that you should understand (these are the terms that are italicized in Easley and Kleinberg). If you don’t understand them, go back and find them in the reading or ask me a question.