Padgett and Ansell’s 1993 study is a classic SNA one because of its use of historical material. Their main argument that the Medici’s political control was produced because of network disjunctures within the elite that instead were occupied the Medici, within the political conflict of the oligarchs vs. the ‘new men’ in Florence. The networks they mined were marriage, economic, and patronage networks that Padgett and Ansell argue created a particular flow of power and influence through the social network.

They coded 9 types of relationships mined from historical texts: 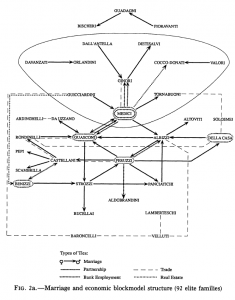 Here, they faced the problems of creating boundaries (the ‘community’ here is Florentine elite). To make whole network analysis possible, there needs to be a bounded group, so the definition of who precisely was Florentine elite is an important part of Padgett and Ansell’s method. In the end, by establishing criteria of who counted as elite, they were able to limit the number of Florentine familiies under consideration to 215. Ths number was further cut down to 92; 92 families with economic or marriage ties.

Most sociologists’ Durkheimian presumptions are that the more overlapping ties one has with another, the more closely and holistically bound the other is to you. Obligations from one sphere spill over into another. The Medici, however, apparently believed the opposite: to control followers politically, segregate one’s social relations with them. On the whole, multiplex ties (across marriage and economics) were discouraged. (Padgett and Ansell 1993, 1280)

Note there are plenty of attributes to bring into the network analysis, once the structure is determined. These were used to further explore how the Medici’s held power.