What can you recall of the internet world 15 years ago? 20 years ago? Most of us were probably too young to comprehend the new age of the internet world. A little after we were all born, believe it or not, many scholars were anticipating that the Internet would miraculously give its users access to complete freedom, revitalizing citizen-based democracy, or even ultimately eroding the powers of the government. In 1996, internet activist, John Perry Barlow, even published a “Declaration of the Independence of Cyberspace”.

“Governments of the industrial world, on behalf of the future, I ask you of the past to leave us alone. You are not welcome among us. You have no sovereignty where we gather. You have no moral right to rule us nor do you possess any methods of enforcement we have true reason to fear. Cyberspace does not lie within your borders”

Although encapsulating the spirit of the time, history unfortunately did not play out as Barlow had hoped.

By 2001, people realized that the internet would in fact, have some limitations. Their dreams of “a parallel universe of pure data, an exciting new frontier where a lawless freedom prevailed” came crashing down upon them. As it turned out, people realized, governments unfortunately did have sovereignty over cyberspace. Despite perceptions of the internet “being everywhere yet nowhere, as free-floating as a cloud,” governments could still control access to the internet in their country’s region. 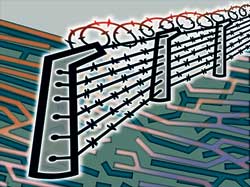 Today, we think of governments’ powers over the internet as natural and probably inevitable, and yet at the turn of the century, this “control” was a disappointing surprise. While it was a shame that the Internet did not, after all, serve as an agent of achieving freedom, people did realize that perhaps the imposition of rules might have been better than the alternative. An article in The Economist (cited in the Wilson and Peterson article) explores this further: a world without regulation could be dangerous; it would mean cheaters and criminals could do openly commit crimes, and not punished for them. And world with an identical set of rules would also be dangerous; how could they have expected every country to agree on all regulations – such as access to pornography or gambling. And of course there were many more problems such as the safety of online transactions, international shipping, etc. Thus maybe the only solution was for the government to implement rules as they would in the physical world. Guess the “parallel universe” could not be a entire separate entity after all…

Though people fifteen years ago might have hoped that if they wanted to, they could simply exist in this separate internet world, this world is in fact – though some might dispute this today – part of the real world. Before we comprehended this idea, many truly thought that the virtual community would dominate, and as Wilson and Peterson explain, technology today instead is viewed “as a context for, rather than a central part of culture.”